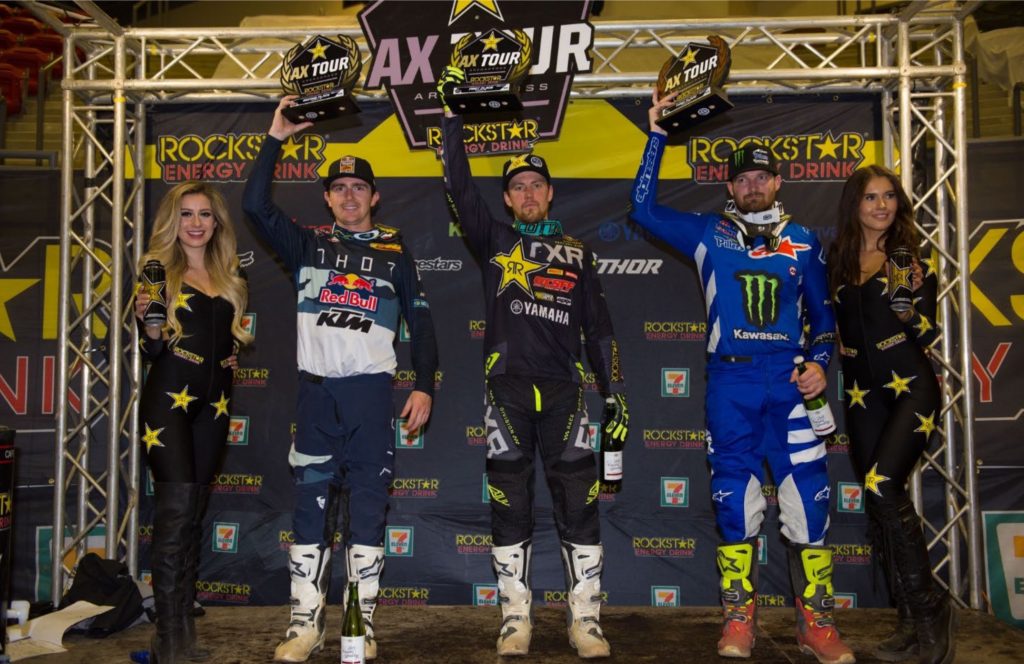 Rockstar Energy OTSFF Yamaha’s Phil Nicoletti tightened the screws on the competition to grab the win in the 450 Pro main this past Saturday night at Round 2 of the Rockstar Energy Triple Crown AX Tour in Calgary, AB. His teammate Shawn Maffenbeier managed to bring home a top- five finish, claiming a noteworthy fourth at the finish line. Although Nicoletti and Maffenbeier seemed a bit tentative in the qualifiers – recording fourth and sixth respectively – they unleashed the power of their YZ450Fs when it came down to do some serious racing for points.

Nicoletti and Maffenbeier found themselves gating in the same heat race at Calgary’s Agrium Event Center. The teammates unfortunately came together in the second corner right after the start when Maffenbeier bumped Nicoletti’s back wheel, with Maffenbeier going down for a soil sample

Nicoletti managed to stay afloat and would greet the checkered flag in second place and with it a berth in the Clash for Cash. Maffenbeier, who ended up third, did not advance to the Clash. 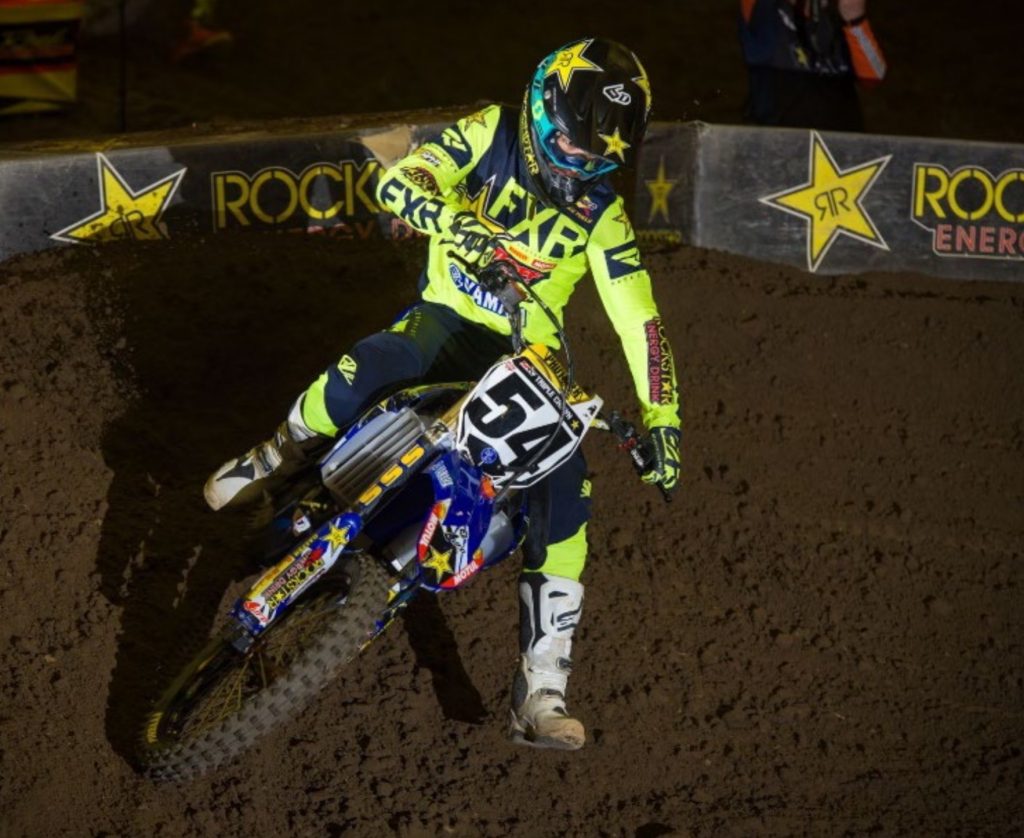 In the Clash, Nicolleti had to settle for an outside gate pick. Anxious for a frontrunner start, he found himself spinning out of the gate instead. This left him trailing slightly behind the pack, going into the first corner. The New Yorker then proceeded to ride a few laps in sixth place before moving into fourth, where he finished.

Not about to make the same error twice, an on- fire Nicoletti blew out of the gate in the main to take the holeshot in front of the usual suspects, which included Cole Thompson and Matt Goerke. Not wasting any time, he poured

on the gas, putting a bit of real estate between himself and the chase group. Thompson managed to close the gap a few times but Nicoletti wouldn’t have any of it. He pushed ahead and never let Canada’s undisputed indoor specialist, Thompson, install himself in a position to attempt a pass. Nicoletti stayed the course and when all was said and done, he garnered his first win on Canadian soil. Nicoletti’s victory was extra sweet, as it took him from fourth place in the points to third. 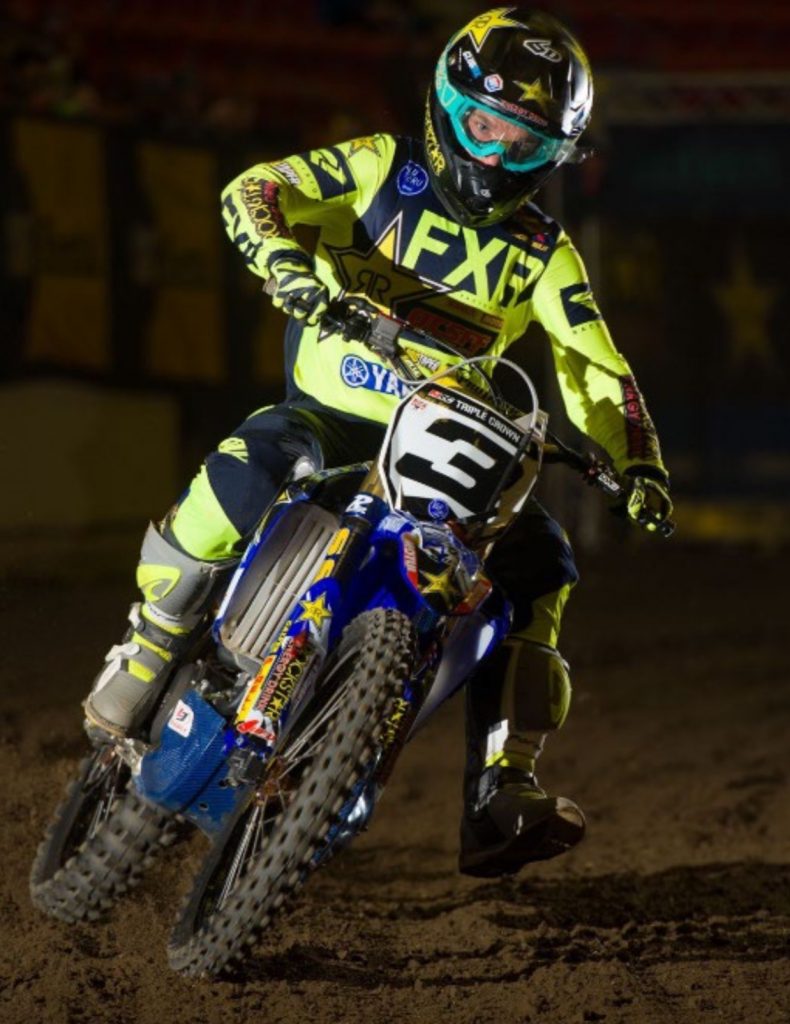 Maffenbeier, who started just outside the top five, made a pass about seven laps into the race for fourth. At one point Goerke, running in third place behind Thompson, made an error and went down. This gave Maffenbeier an opportunity to close the gap, almost getting past the multi-time motocross champ, but Goerke was up and running in no time and “Maff” had to settle for fourth at the finish line. Although it wasn’t the finish he was looking for, the Swift Current, SK native can look back on Calgary as a great improvement from his ninth place finish in Abbotsford the previous weekend. It also means he moved ahead in the points from ninth to sixth.

“The night started off decently enough, although I struggled with my starts early on. I executed the main event start well, though, and was able to keep the lead on my Rockstar OTSFF Yamaha YZ450F without working up too much of a sweat.

The bike was simply awesome and dialed in to make me really comfortable, not to mention very competitive. I’m happy to get my first Canadian win and looking forward to more,” Nicoletti said.

“We came into the weekend hoping to better our results from Abbotsford. That was goal number one and we achieved that. The day didn’t start the best but we made some changes and when the gate dropped for the main, Phil just grabbed the holeshot and then ran his own race, coming out with the win,” Nicoletti’s mechanic Risi George noted. 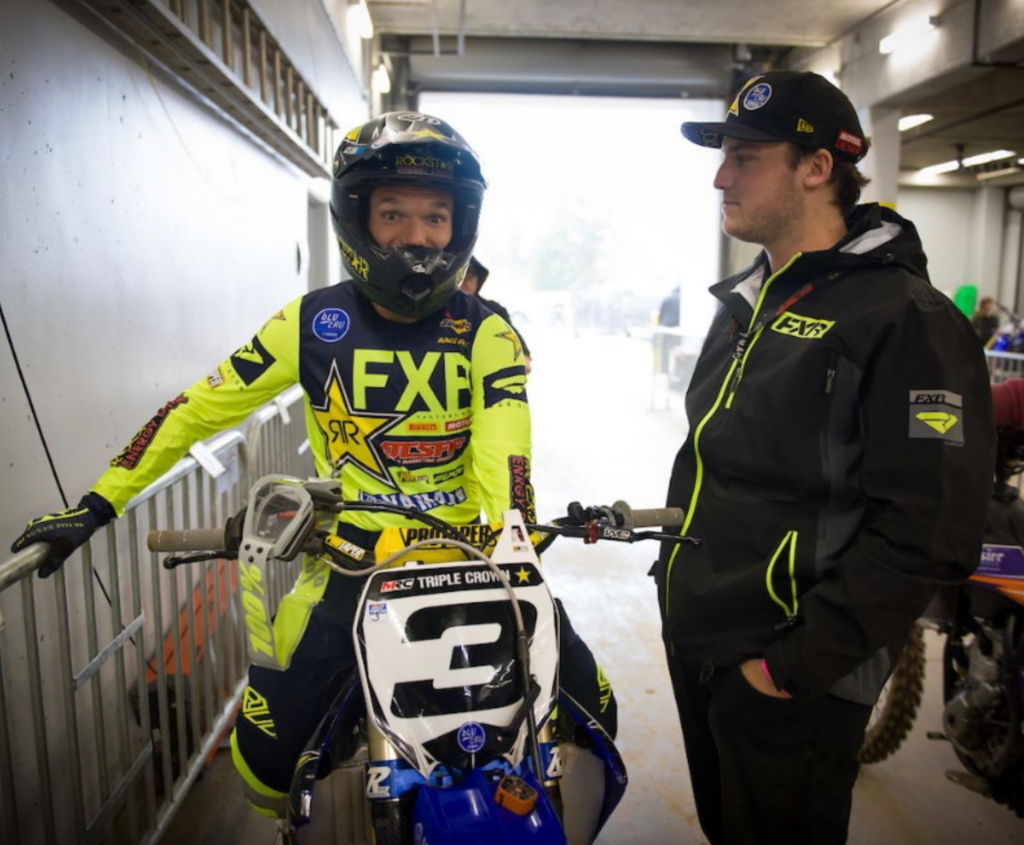 Points After 2 of 4 Rounds (Unofficial)

The Rockstar Triple Crown AX Tour continues for Round 3, after a one-weekend break in the schedule on April 27, at the Progressive Auto Center in Sarnia, ON.

About Rockstar: Rockstar Energy Drink is designed for those who lead active lifestyles – from Athletes to Rockstars. Available in over 20 flavours at convenience and grocery outlets in over 30 countries, Rockstar supports the Rockstar lifestyle across the globe through Action Sports, Motor Sports, and Live Music.