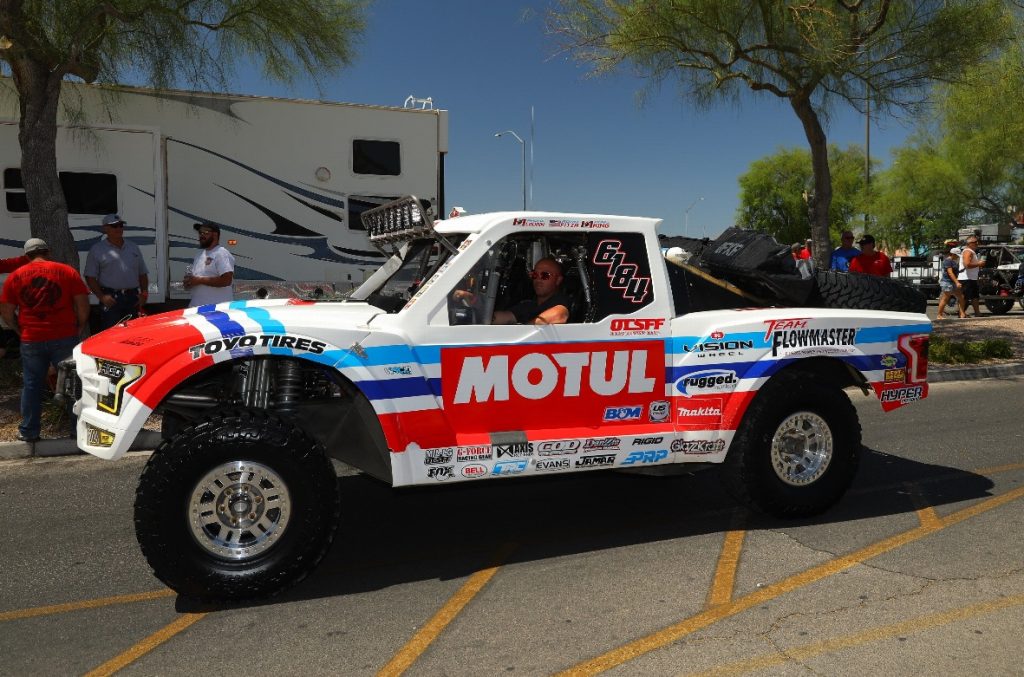 On Friday, August 16th Team OTSFF/MOTUL campaigned the Best In The Desert RacingAssociation’s 23rd running of the spectacular ‘Vegas to Reno’ off road race. At approximately 505miles, the storied event qualifies as the longest and toughest off-road race in the United States, traversing some of the most unforgiving desert in the world, including dry lakebeds, tight and twisty sand washes, and the high elevations of the mountains. 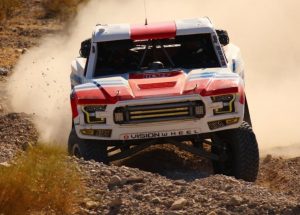 Although the team wasn’t able to snare the top-five finish they were looking for, the 6100 SpecTrophy Truck’s driver Andre Laurin and navigator Kerry King managed to reach the finish line of the gruelling race in a respectable 10th place in the 6100 class. Thirty 6100 trucks were entered in a total field of 255 various entries. Not surprisingly, as per most of the desert races, close to half of the entries did not finish ‘Vegas to Reno’. Taking into account that a number of the drivers who finished ahead of Laurin and King were not regular series contenders, Team OTSFF/MOTUL did excellent business in the points chase anyway. With one event left on the schedule, the team sits fourth (unofficial at press time) on the 6100 Championship scoreboard. 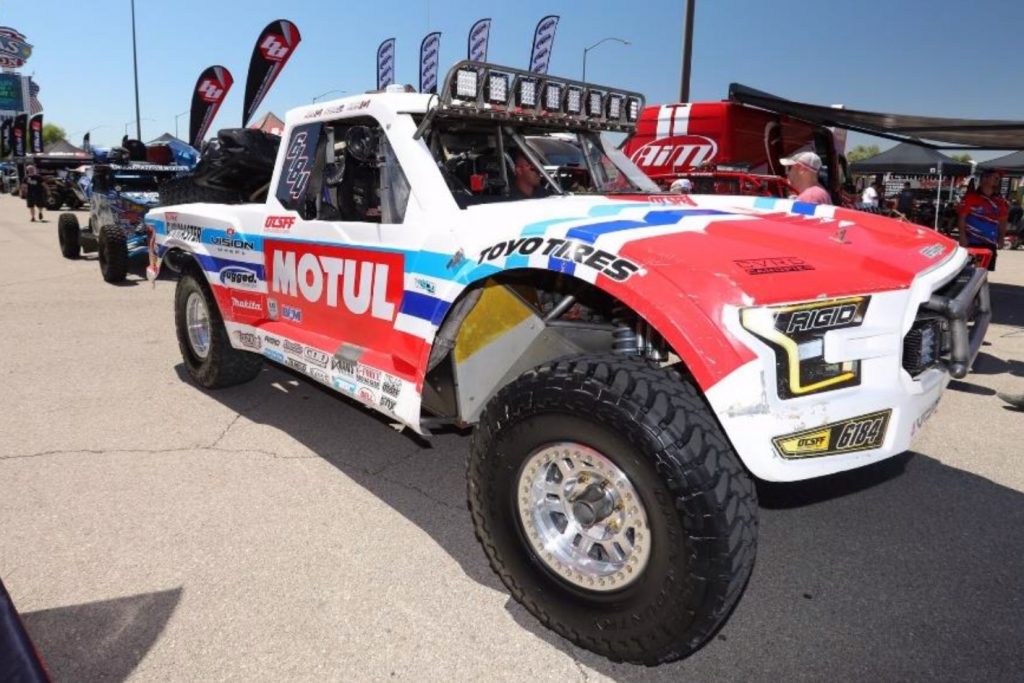 A few days prior to the race on Wednesday, August 14th, Team OTSFF/MOTUL was scheduled for an early morning (6:30 a.m.) qualifying run. Laurin drove a very safe and conservative qualifying lap that saw him end up placing 15th in the 6100 class. On Thursday, the truck underwent a rigorous tech inspection. Everything transpired without a hitch and the team received the go-ahead to start in Friday’s race, which would kick off in Beatty, some 117 miles north of Las Vegas. 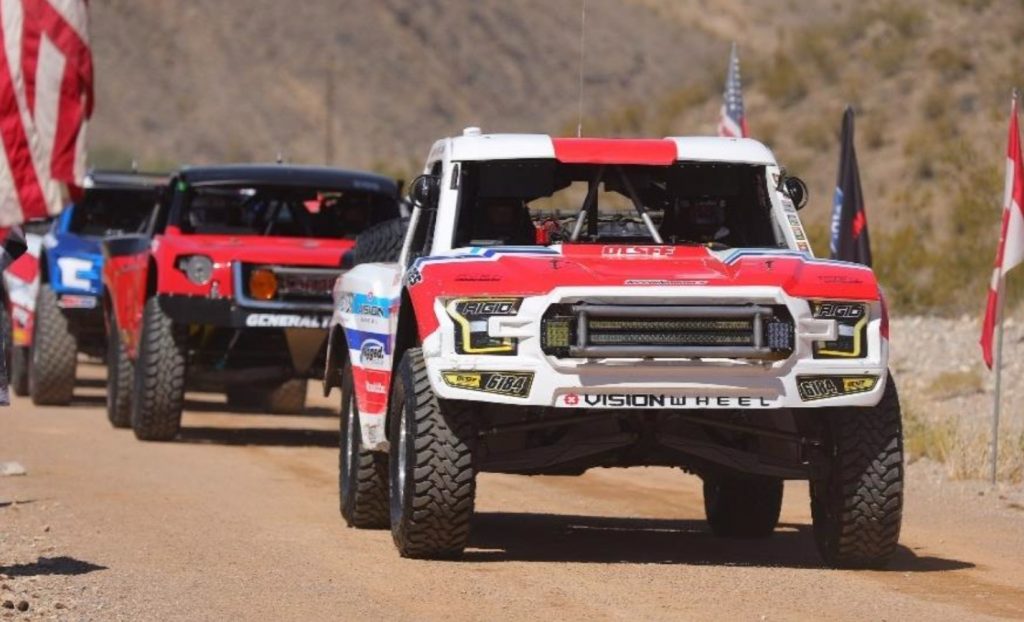 On Friday morning staging for the race began at 8:30 a.m. in Beatty. Laurin and King got off the line a few hours later. By this time the thermometer already hovered around a scorching 106°F. 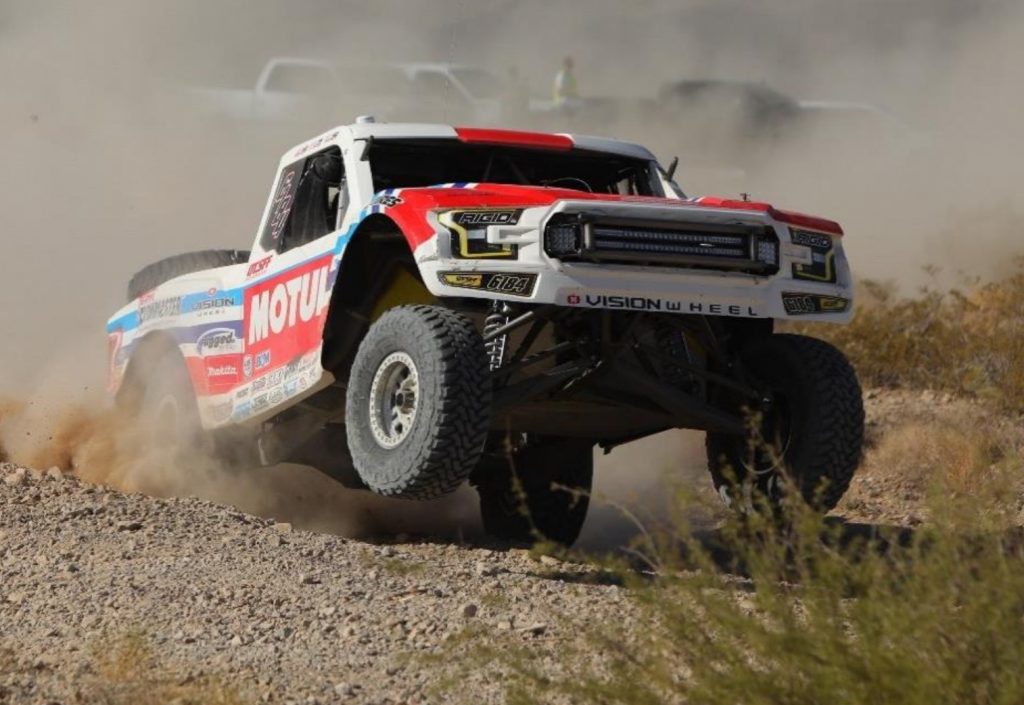 Drive-by inspections took place at Pits 1 and 2, with everything OK. Ditto at Pits 3 and 4. At Pit 5, Race Mile 168, team manager/crew chief/builder/reserve driver Adam Fitza had Laurin and King pull to a stop for a quick visual inspection of the truck and to add fuel. They were in and out of the pit in approximately one minute. By this time the field was stacked. The time spread from fifth to 17thplace was within two minutes! While many of the entries had already dropped out of the race, or lost precious time dealing with mechanical problems, Team OTSFF/MOTUL cruised on with zero issues. 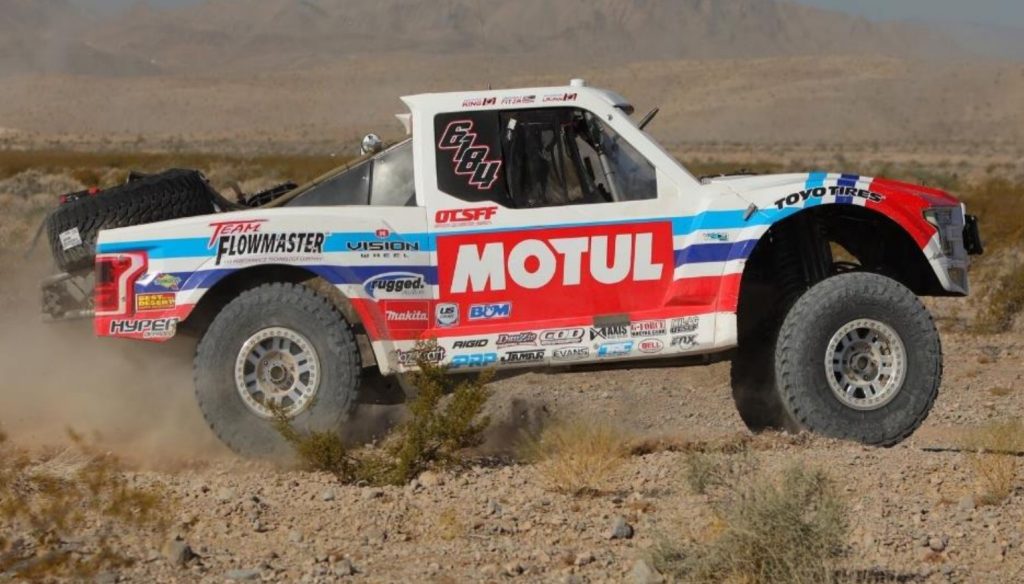 Pits 6,7, and 8 were also drive- bys. Everything was A-OK. The truck was performing flawlessly despite the terrain beating it was taking and the extreme desert heat. By noon the temperature had reached +120°F. Inside the truck Laurin and King had to further contend with the heat generated by the truck’s potent GM LS engine. The cabin’s temperature pushed well into the 140 to 150°F range. Not for the faint of heart! 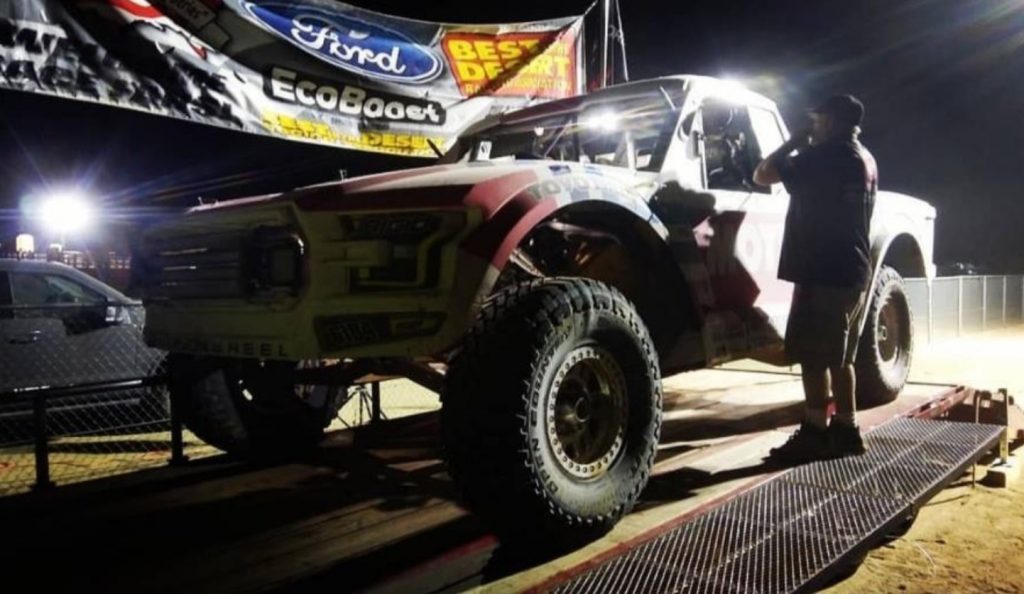 Pit 9, Race Mile 312, was another scheduled stop for the team. Again, more fuel was added and a quick vehicle inspection was performed. Fitza was suited up and ready to jump into the driver’s seat. He was on stand-by to get behind the wheel at any time, if Laurin felt dehydrated or no longer 100% focused to continue. Laurin, who maintains a rigorous physical regimen, decided to keep driving. King, also fit as a fiddle, decided to ‘Iron Man’ it out as well. The duo would take the truck to the finish line. Meanwhile, at Pit 9, over six 6100 Spec trucks pulled in at the same time … reminiscent of a NASCAR pitstop. With their well-practiced pitstop routine, the crew knew they could get the truck back in action faster than a New York minute. And they did! 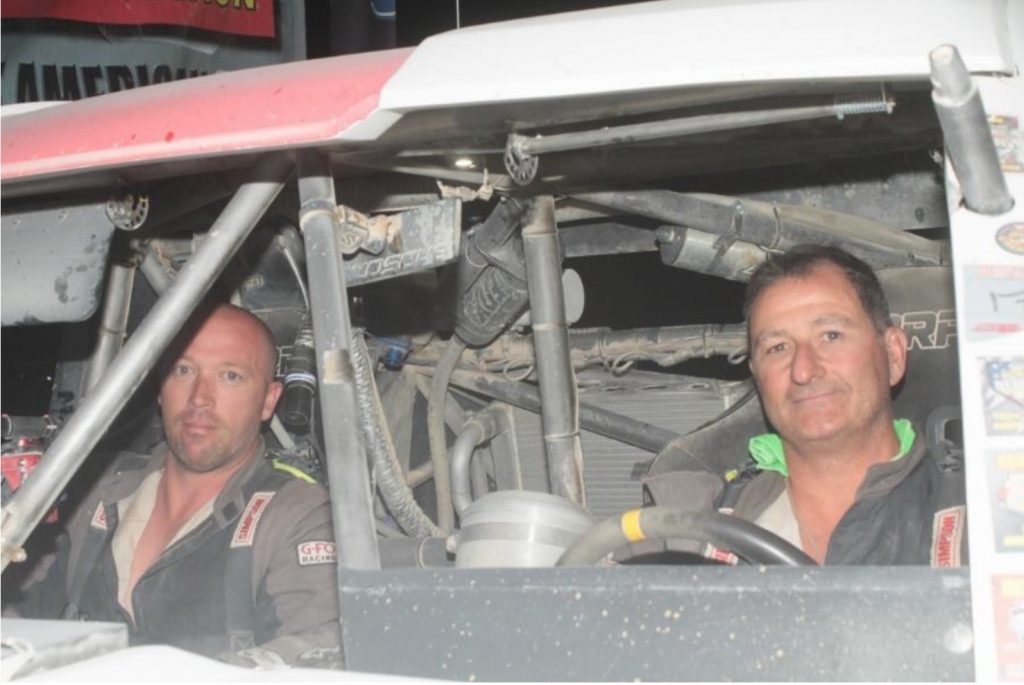 “We needed to get in and out of the pits as fast as possible, in order to make a few positions. We did 40 gallons of fuel at Pit 9 and the truck left about 30 seconds later. We ended up gaining two positions just at Pit 9 alone. Everybody was on top of their game. Our pitstops are among the quickest of any team. It’s go-go-go!” Fitza noted.

The team’s next stop was slated for Pit 12, where Fitza and his crew would already be waiting. (Crew members get to the various pits via paved highway.) Between Pits 9 and 12 Laurin and King – pushing the truck and its tires to the max – had to change a few flats, incurred by driver error when Laurin clipped some sharp rocks. At Pit 12, the crew had to rerack two new spare tires, just in case the rock-strewn terrain claimed another tire. As an insurance police to get to the finish line Fitza decided to splash and extra 10 gallons of fuel into the gas tank. And off they went to Reno. Just after sunset the OTSFF/MOTUL truck crossed the finish line. It had taken Laurin and King 10:18:02.865 hours to clear the task. In a motor sport that claims more DNFs than any other, it was mission completed for Team OTSFF/MOTUL.

From the Horse’s Mouths

Andre Laurin: We went into this race knowing we would have to keep cool heads in the desert heat, if we wanted to get to the finish line. And it’s hard to keep your cool when you’re wearing a fire-resistant race suit and a full-face helmet inside a truck that’s like 150°. Everything is hot to the touch, including the steering wheel. You just kind of have to try and forget about all that and focus on the racing aspect and your goal to at least finish the race. You want to finish well, of course. You want to finish in the points. But you kind of have to let the chips fall where they may in a race like ‘Vegas to Reno’ as far as position goes. You know that if you stay out of trouble you will finish. If you have a truck like we have, you’re pretty well assured you’re going to place at least top-fifteen. We got tenth and we’re looking good in the points. I’m happy with that.”

Kerry King: “The strategy for this race was to make sure we finished the race. And to do that we had to preserve the motor. We were actually overheating within the first hour of the race. Heat warning lights were flashing like Christmas tree lights. We pushed the envelope when we could and held back when we had to. More than we wanted to. It’s mentally tough to hold back when

you’re racing. When to push, when not to push. But we had to let the motor and everything else on the truck cool down every so often or deal with the consequences. We had guys come creeping up on us while in one of our cool-down modes and I’m yelling at Andre to let them go and do their thing. He, of course, wanted to go faster and leave the others in our dust. That’s just instinct, but you have to be able to override that if you want to see the checkered flag. Some of

these guys that we let go by us we would repass in the next ten miles or so, because they were parked next to the road with a mechanical issue.”

Adam Fitza: “I’m super ecstatic with the results. We have all worked our butts off with this team and have come a long way in the first two years of campaigning this particular truck. It showed that with teamwork we can beat the desert. The chassis, suspension, motor, etcetera performed as intended. Andre drove one hell of a race and Kerry made sure that cool heads prevailed!”

Team OTSFF/MOTUL would like to thank all the individuals and contributing sponsors for their invaluable support to help make our participation in the ‘Vegas to Reno’ race possible. You guys are awesome!

The OTSFF/MOTUL 6100 Spec Trophy Truck will next be in action when The Best In The DesertRacing Association’s stages its final showdown of the season in Laughlin, NV, October 10-13. We hope to see you there!