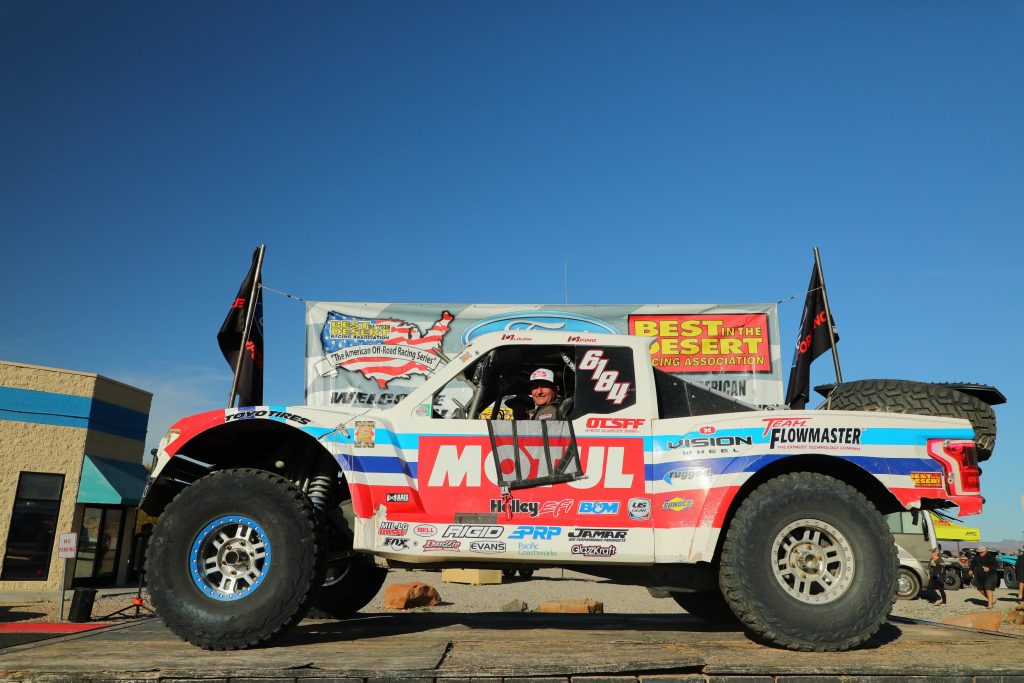 A noteworthy 12th place finish in a field of 40 6100 Spec Trophy Class trucks, proved to be the result of Team OTSFF/MOTUL at the opening round of the Best in the Desert Racing Association points chase at the storied Parker “425” in Parker, AZ this past weekend. In the combined truck class, numbering 70 vehicles, driver Andre Laurin and navigator Kerry King deftly nailed down 18th overall in what is considered one of the toughest races on the off-road schedule. Just how tough was underscored by the fact that 31 of the entries failed to even reach the end of the line.

The Parker “425” was the first event Laurin drove the more powerful, Adam Fitza-rebuilt 6100 truck. This resulted in a slower qualifying run while he got comfortable with the vehicle. Laurin’s wife Monique, who is no stranger to the racing scene, took the navigator’s seat for the qualifying session to get a little taste of the Parker “425” race course. How did she like it? “I simply loved it! A bit scary at times, but I more than trust Andre’s driving skills,” Mrs. Laurin noted.

By the time the race got underway, Laurin had everything dialed in. This was reflected in the speed he was tearing up the Arizona desert, finishing the race nearly two hours faster than he did last year. The extra quick pit-stops – three of them – ensured Team OTSFF/MOTUL did not lose position on the track.

In fact, they managed to gain a few thanks to the efforts of the ready-steady-go pit crew, which included team manager/builder Fitza and some of his buddies from VISION Wheel and DFR. 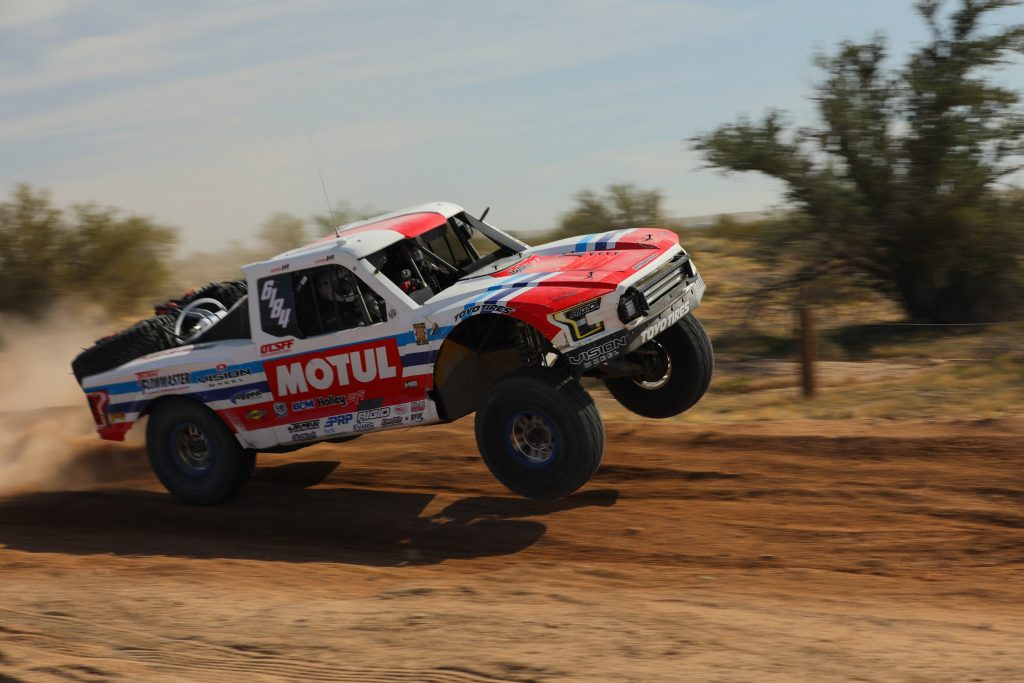 Heading due east off the start line in 33rd place at 7:55 am – the first truck left at 7:15 – with the sun shining in Laurin and King’s eyes, not to mention the thick, blinding dust clouds churned up by the trucks ahead of them, the duo had their work cut out for them. Despite the handicap – which was par for the course for all competitors – lap one went very well, with Laurin passing a number of rivals.

After completing Lap 1, Lauren and King pulled into the Main Pit for a scheduled truck inspection and to take on fuel. Sixty gallons of fuel was added. Everything else, including the 40-inch Toyo R/T tires looked good. All this was achieved in just under one-minute and off they went to tackle Lap 2. With improving visibility due to less dust hanging in the air, Laurin cranked up the pace of the OTSFF/MOTUL truck and more competitors were put into his rear-view.

When the truck pulled into the Main Pit, after completing Lap 2, Fitza made the decision to swap the rear tires, knowing from personal experience that the track gets beyond brutal on the third and final lap. Laurin and Fitza were back in action in a flash! The tire change, truck inspection, and another 60 gallons of fuel added to the tank took about one minute and fifteen seconds. Pouring on the gas, an unleashed Laurin blitzed by some more rivals as if they were standing still. With the race winding down, the OTSFF/MOTUL truck was now in possession of 12th place.

Although he side-walled a rock some four miles from the finish line, which resulted in a flat rear right tire, Laurin kept on pushing to maintain his 12th place position. By the time he and King reached the finish line the tire had shredded off the Vision Wheel rim. The rim, meanwhile, lived up to more than expectations and survived totally intact. Round 1 was a wrap. A successful one at that. 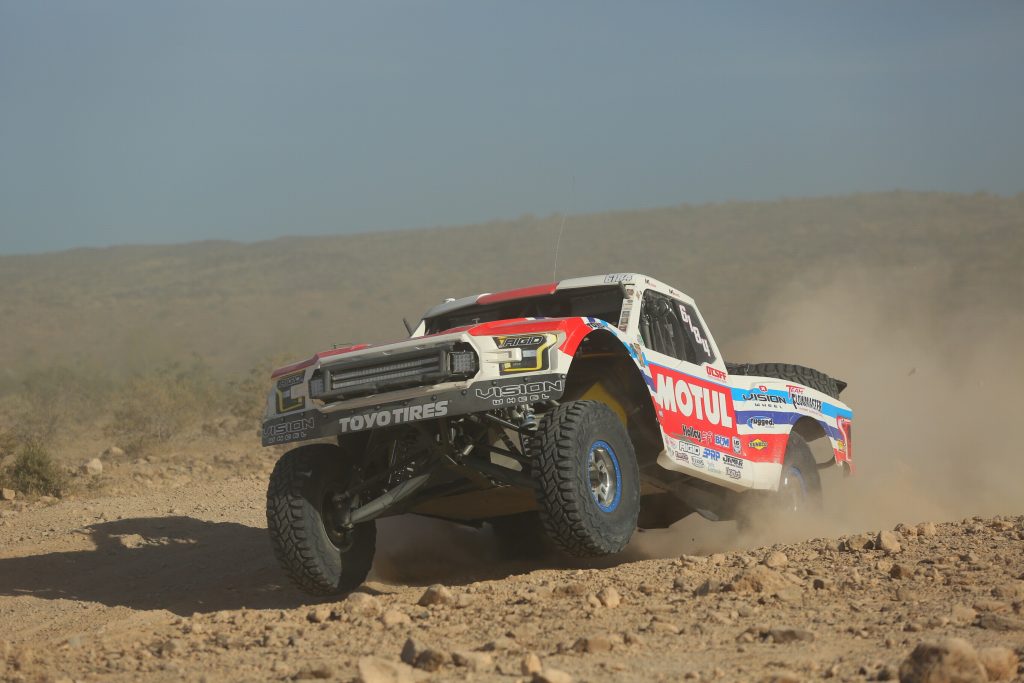 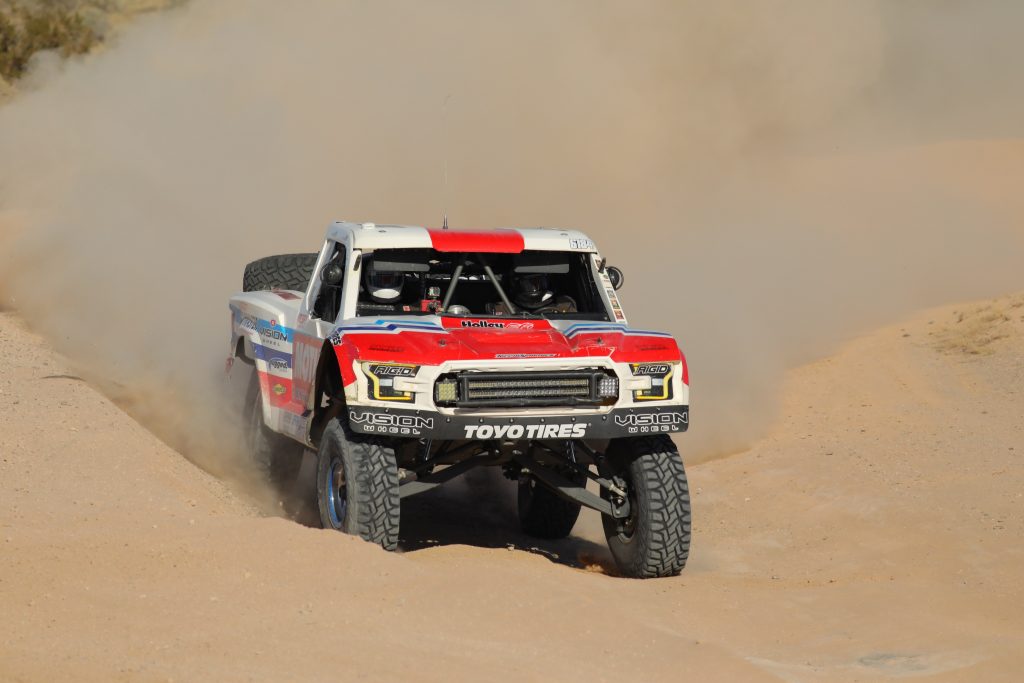 From the horses’ mouths

Andre Laurin: “The fasterwe went, the better the truck performed. It was incredible! The first sixty miles were really tough. Once we got through that, and the field started thinning out with trucks DNF’ing left and right, we passed quite a few competitors. The third and final lap we actually drove faster than the first two. It was basically smooth sailing till the end except for my error, side-walling the rock. We still maintained enough speed, though, to keep our pursuers behind us.”

Adam Fitza: “I didn’t leave anything on the table with the off-season prep. In my estimation the truck was 110%. Andre verified that estimation on the track. We can say that this was a very successful race, coming from thirty-third to finish twelfth in hands-down the most competitive class in off-road racing. We were all happy with that. The setup was on point. We tried some new stuff and it worked. I’d like to extend a huge thank you to OTSFF for being in our corner; to MOTUL, whose oils never skipped a beat and kept our

mechanical parts safe and running strong; to VISION WHEEL for the unbelievably strong wheels; and to Toyo whose tires hooked up with amazing traction. Thanks also to Pacific Coachworks for the hospitality of a trailer; and last but not least to everyone else who supports this badass sport we all love called off-road racing!”

Team OTSFF/MOTUL would like to thank all the individuals and contributing sponsors for their invaluable support to help make our participation in the “Parker 425” possible. You guys are awesome! We look forward to seeing you at the Laughlin Desert Classic, February 20-23, in Laughlin, NV.